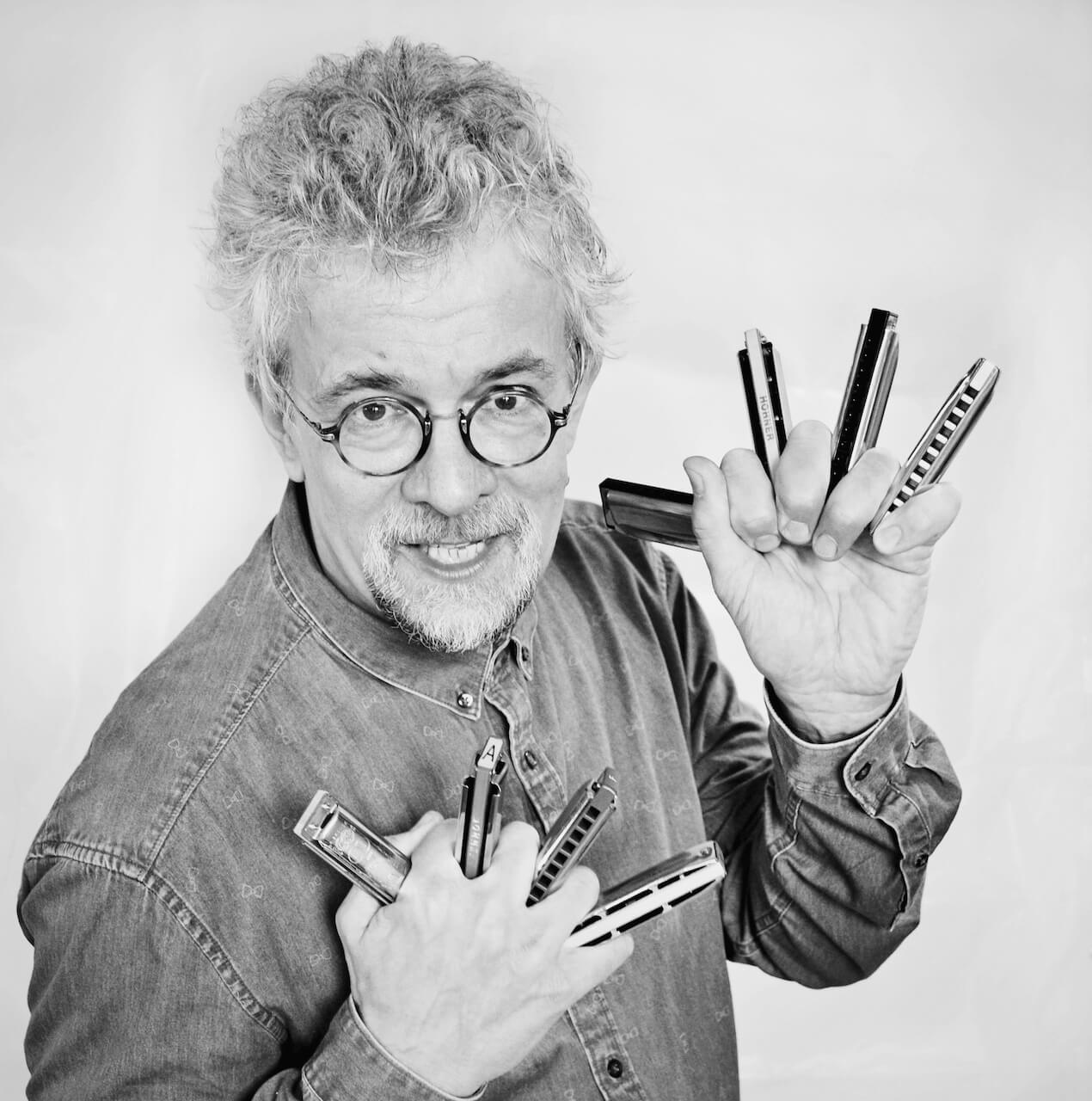 Sławek Wierzcholski and Nocna changing Blues is a classic! They have their well-deserved place in the history of Polish popular music and entries in encyclopedias.

From the first concert in March 1982 at the student club „Imperial” in Toruń to the present, faithful to the chosen genre, without succumbing to fashions and trends, they achieved the status of a cult group.
They have twenty-eight released CDs (3 LPs, 4 DVDs, 21 CDs), of which four have achieved the status of „Gold Record”, recordings with American blues stars such as Charlie Musselwhite or Louisiana Red, concerts preceding world-class blues stars: B.B.King (Warsaw 1996) and Blues Brothers (Nuremberg 1989). Thousands of concerts in Poland and virtually all of Europe, in the United States and even in Zimbabwe!

Although they started as orthodox bluesmen, during over three decades of activity, Sławek and his band created their own unique style based on acoustic instrumentation and being a fusion of blues, folk, jazz and author’s song. Sławek is the author of the whole repertoire of the group, including many real hits, such as „Sixth zero two”, „Blues lives in Poland”, „John Lee Hooker” and „Chory na bluesa”. He is also the author of music for television series („Babilon.pl” dir. Wojciech Maciejewski and theater plays („The Secret of Tomek Sawyer” dir. Giovanni Castellanos: https://www.youtube.com/watch?v=dPY0kMFU-As)
He is also the author of music illustrations for popular TV series, such as „Father Mateusz:” „Rodzinka.pl” or „Year on the plot”.
Among the author’s CDs released by Sławek include the CD „Pressure” accompanied by Dżem, „Friday evening with Wojciech Karolak and CD” Lonely Dinner „with Krystyna Prońko. Sławek also played guest records of such artists as Maanaam, Majka Jeżowska or Healthy Water.

The Blues Night Change is devoted to three television documentaries broadcast in national programs: „Secrets of the Pre-Dawn” dir. Grzegorz Styła (1990), „Blues will always win” dir Jerzy Krysiak (1996) and „Chory na bluesa” by Hubert Gorczyca 2016.
Sławek Wierzcholski is a harmonica virtuoso and author of two popular handbooks for playing this instrument. He also conducted harmonica courses in TVP Program 2. He is the endorser (face) of the Hohner company, which in 2012 honored him with the „Crystal Harmonica”.
Sławek was the first and only musician to play the harmonica bugle call from the tower of St. Mary’s Church in Krakow broadcast all over the country on April 1, 2015.

He is an active radio journalist – for twelve years he realized in Program 3 of Polish Radio 1500 (!) Original programs, incl. in such cycles as: „Blues in a nutshell”, „Blueeczek”, „From the blues collection of Maria Jurkowska” and others. For over a decade, he hosted the „Ok blicea bluesa” area „Blues” on the Warsaw Radio „for you”. Currently, for three years he has been running the broadcast „Roots and Fruit” in Program 2 of Polish Radio.
Sławek also works as a press journalist, publishing in the quarterly „Your Blues” and earlier for several years in the „Jazz Forum”).
Sławek Wierzcholski is the originator and artistic director of the „Harmonica Bridge” festival in Toruń, which has been presenting the world-leading virtuosos playing the harmonica in various styles for seventeen years.
Sławek is an active social activist: in the current term, the secretary of the Section of Authors of the Music and Dance Music Works of the ZAIKS Association of Authors, for several terms the vice-president of the Association of Artists of the Performers of Music and Songs and Musical Songs SAWP and the vice-president of the Association of Authors and Composers of the Association. In his hometown of Toruń, for several terms, he has sat on the Presidential Council of the Mayor of Toruń.

For his merits and artistic achievements, Sławek was awarded the silver medal „Gloria Artis”, the medal „Thorunium”, the honorary badge of ZAIKS, he received the awards „Teleexpress” and Program 3 of Polish Radio. In recognition of his artistic achievements, he was awarded the honorary citizenship of Rawa Mazowiecka and the city and commune of Leśna.